News / News & Media / Yet More Mouths to Feed at UNIS

Yet More Mouths to Feed at UNIS 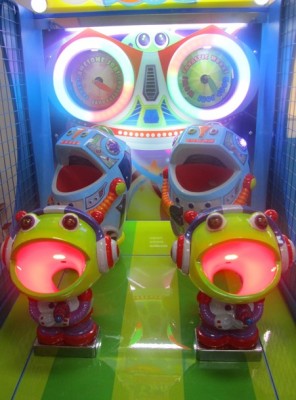 Dino Pop has been one of the most popular children’s entertainment machines over the last couple of years at Universal Space, but they have now introduced a new member to the Family Series with more than just one mouth to feed.

Say hello to Astro Invasion, next in line to be a hit at family entertainment centres all over the US and Europe.

Whereas Dino, the pink dinosaur loved by children all over the world, had just one mouth to feed, Astro Invasion has two hungry aliens and two rotating robots who just love to gobble up the bright colored balls as they are tossed toward them.  For the seasoned player the target of the two spaceship engines with spinning needles at the back offers a real challenge.

Steve Perkins, of Instance Automatics based in the UK, was recently exhibiting at EAG in London where Astro Invasion was launched into the European marketplace and was delighted with the new game,  “this machine is another winner from the Family Series with the line up of Dino Pop, Ducky Splash and Cheeky Monkey.”

Yes, Astro Invasion offers fun gameplay for all ages. Shipping is now available in the US and Europe.