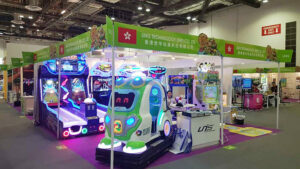 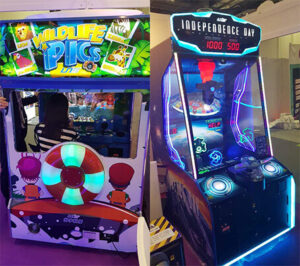 Asian Attractions Expo (AAE) 2017 just ended last week (June 14-16) in Singapore. The show was held at the Sands Expo and Convention Center in the beautiful Marina Bay Sands. UNIS of course was there, and we had a terrific show!

At the UNIS booth, the Lane Master continued to be the knockout winner and attracted much attention from many international distributors worldwide.

Independence Day: Resurgence single-version debut at this show. Player engages in a multi-level space battle, shooting moving targets in order to activate the mothership for a chance at winning the Mega Bonus. Ever since the twin-version appeared at IAAPA last November, customers have been requesting for a single player version of this licensed game. Same exciting gameplay, just smaller footprint.

UNIS also exhibited Wildlife Pics for the first time. This 2-player interactive game takes players on a rafting adventure where they take photos of animals using a mounted camera controller. The game seats up to 2 people, perfect for a parent and a child to play together.

Both games will be at the IAAPA Expo in Orlando later this year.