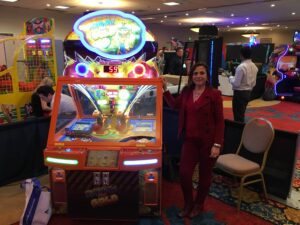 UNIS showed one of their new products Panning for Gold with a nice response from the attendees.

The attendance this year was greater than last year.
Jim Wyatt from NEN will be the new association President for 2017 with Mike Martinez stepping down.

In attendance was Jarhett Blonien, lobbyist from the California state legal firm of Blonien, Boyd and Condit. He spoke of the changes with the new President and that the state of California not being in accord with the new regime may be adding new taxes in different areas and that this may affect our industry.

The incoming AMOA President, Gaines Butler also spoke in regards to some of the legislation that is occurring in some of the other states and some of the taxes that operators pay around the country.

The mood of the operator community in California was upbeat with many operators stating that they have seen an upswing in business over the last 12 months.