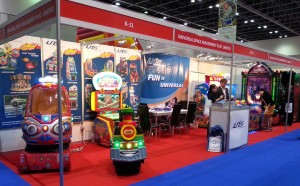 UNIS Games enjoyed another successful show at DEAL in April.

At the show this year there were 200 exhibitors and the standards were very high.

With a busy first day there were many visitors trying out the machines on the UNIS stand, After Dark DLX, Astro Invasion, Bike Rally and Mini Train were particularly popular, with good interest also shown in Veggie Blast and Space Ship .
Warehouse of Games from UAE were also exhibiting at the show displaying Fruit Mania Xtreme, Pirate Hook and Crab Catcher, and ASI (also UAE), displayed UNIS’s Tubin’ Twist.