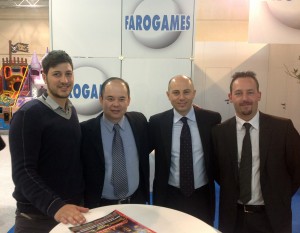 UNIS is proud to have Faro Games display its latest lines again for the ENADA Italy show. The show is taking place in Rimini, Italy from March 12th to 15th 2013.

Faro Games have supported UNIS on all games released late last year and this is the debut show in Italy for many lines.

After Dark DLX and After Dark STD were constantly busy with gamers and buyers testing it out. Cowboy Shootout had a great reception for its debut and Pirate’s Hook along with Fruit Mania Extreme continued to shine!